Creepy and eerie all crammed into one pudgy little man.

In 1963, he directed and produced a terrifying bit of filmography.

The story begins shortly after the end of World War II. Set in a Cornwall village, no less. As if the British haven’t had flying threats.

I remember sitting in the living room watching the horror unfold on black and white television. 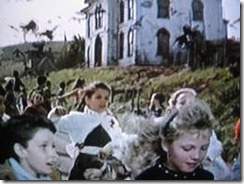 All species of birds acted together. Sparrows and seagulls and crows.

An amateur ornithologist in the movie declared that different bird species did not flock or attack together.

But these birds did. Terrorizing villagers. Eventually, all of Britain.

But, honestly, I hadn’t thought of the movie in years.

Not until I was driving home from Mission.

Crows gathered in the road.

They all flew away, except for one.

This crow never flinched. Not a feather.

Then came the “thump”. Heard it and felt it at the same time.

And, I knew at that moment, birds were just birds. (Hitchcock still needs some watching.)

I got choked up.

I mean, you should have seen what I saw in the rear view mirror.

The bird looked as if he had gotten caught in a game of freeze tag.

Fact is, nobody in the car could believe that I was upset about a crow.

General consensus – What value is a bird compared to a human being?

“Wrong question,” I should have yelled after making a game- show-like buzzer noise,

“How about – If God values even the most insignificant of birds how much more does He love us?”

They are God’s creatures, after all.

Truth is, God’s not too busy to notice when one sparrow falls.

And, to think, that we are worth more than many sparrows.