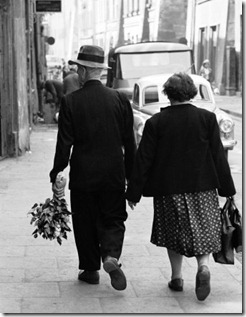 When Freddie Mercury penned the lyrics “Can anybody find me somebody to love?” he stole the words right out of my heart.

I was 27, and I longed for a Hollywood style romance –

Instead, I faced a reality that terrified me.

I was terrified that I nothing would change. I would never find a soul mate. Never fall in love.

“I give up ,” I confessed to God one afternoon, “If something is going to happen, you will have to make it happen.”

I had my share of “have-I-got-somebody-for-you” situations. Had a few professions of undying love that just made me feel, well, awkward.

Then, there were the reconnaissance missions into other social circles. No prospects surfaced. No romance bloomed.

I became exhausted. Emotionally drained from the hunt.

That’s why I gave up. Gave in and walked away from the entire game.

Traveled to England on a mission/study program.

It fell apart after a few days and I had to come home.

Then, my Dad died.

In the midst of the sorrow and uncertainly, the blessing came.

Kind of strange. A little misshapen. Not recognizable as anything close to wonderful.

At my Dad’s viewing, I got a phone call.

“I think I met your husband,” my boss said. He was calling from a conference he was attending.

“Never had this happened to me,” he continued, his voice trembling.

After the funeral, the young man mentioned flew out for a job interview.

That’s when the blessing turned awkward.

I vacillated between fear of making a huge mistake and the almost unspeakable possibility that I might be falling in love.

This happened over a quarter a century ago. That’s how long I’ve been married to this same man.

But, I never forgot what I learned about blessings.

1. They are not magic tricks that just go “poof”  and my troubles disappear.

2. They are amazing interventions that interrupt life’s journey in unexpected and sometimes uncomfortable ways.

Ultimately that is their beauty.

Our job is to embrace them and hold on for the ride.