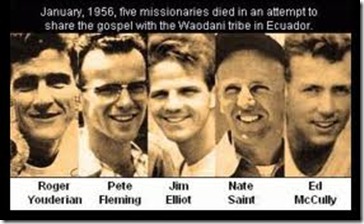 traveled with their families to Ecuador. To be more specific, a rain forest. On the eastern side of the rugged Andes.

It was there that they heard about a stone age tribe. Other Indians referred to this tribe as “Aucas”. It meant savages.  A hostile people

The five families began to pray for the tribe. They asked God to help them bring the gospel to this group.

That is why the missionaries planned their approach carefully. They made long distance contact by flying over tribe’s area and dropping gifts.

Eventually, they arranged to meet the tribal folks in person.

On Tuesday, January 3, the missionaries and their spouses gathered for one final prayer meeting. They sang Edith Gilling Cherry’s hymn to the tune Finlandia:

We rest on Thee, our Shield and our Defender,
Thine is the battle, Thine shall be the praise;
When passing through the gates of pearly splendor,
Victors, we rest with Thee through endless days.

A sand bar in Auca territory.

There the plane would land. There they would meet the Auca’s face to face.

On Sunday the pilot, Nate Saint, radioed back to the missionary base “A commission of ten is coming. Pray for us. This is the day!”

No one ever heard their voices again.

It was a waste, some said. To be brutally murdered by the very ones they were trying to reach for Jesus.

Perhaps some people secretly wondered why the families went to Ecuador in the first place. Why didn’t they just

Maybe such folks had never glimpsed eternity close up and personal.

They did not have to grow old to discover what really mattered.

Perhaps that is why Jim Elliot wrote in his journal, “He is no fool who gives what he cannot keep to gain that which he cannot lose.”

2 thoughts on “What really matters in life–and death”