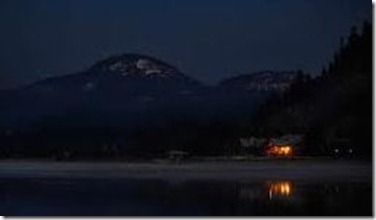 Right now, I’m being serenaded by my grand nephew. He warms up his voice by pinching his finger in the screen door. Helps him hit those high notes. Pretty good considering he’s barely two.

My other grand nephew  has a promising career as a kitty whisperer. Watch out, Cesar Millar.  A four year old from the back woods of Idaho just may take your place.

Well, I only have internet down in the low parts of these woods. And the sun is starting to set. Got to head up to the trailer on the top of the mountain.

Not much to tell today. Tomorrow is a literal foodie hoedown.

Could have some Moose stew, but the meat in question is still running the back roads. No joke. He’s been eating apples off my sister’s tree.

Oh, by the way, I ascertained something very profound.

I’ve got the bite marks to prove it.

Better run. Grandma just fell asleep in an old man’s leather chair. Gotta wake her up and take her back up the hill.

Wish you were here. You could sit on a stump and get to know the locals.