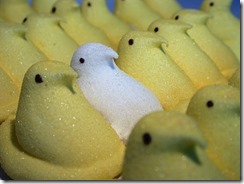 The first time I saw him walking down the road, I just about drove into the ditch. The young man wore a three piece suit the color of a green glow stick. After my first encounter, I saw him often. He strolled  down the back roads in the same suit, bright enough to be seen from outer space.

After moving to Vancouver B.C., I saw a compact car covered with matchbox cars. A child’s play mat complete with roads and stop signs was glued to the hood. On the mat tiny cars were positioned along the various routes. What can I say? Mr.Rodger’s neighborhood on steroids and a three cylinder engine.

And certainly not for me. To be so different. So odd. You could blame my compliance to normality on

Of course, that would be major tip-off that you have never even seen me or peeked into the vehicle that I used to shuttle around my four darling but somewhat grubby little kids.

Or, you could just come to grips with the truth.

I cared way too much about what people thought of me. It ruled my life. I was always doing some kind of fancy footwork so everyone would keep liking me.

It’s exhausting to pretend to be something you are not. You slowly begin to tire out spiritually, emotionally and even physically.

That’s not the way I want to be anymore. So, when I get in a situation that triggers my insecurities, I mentally steer myself in the direction of honesty and self-acceptance.

Don’t get me wrong.

I’m not just talking about what to wear or whether or not to glue little trinkets on the hoods of our various modes of transportation. It’s much more scary than that. What concerns me is how we eagerly change the course of our lives just to please other people. We compromise our principles, deny our passions and turn away from our destiny just to be “in” with the people we think matter.

People who matter are the people who really care about us and our dreams -not just what everybody else is wearing or doing. People who matter embrace and encourage authenticity in themselves and their fellow human beings. They give honest input even if it hurts. Their love is not an I-found-someone-better-to-hang-out-with-tonight-so-see-you-later kind of letdown.

We are part of a complex and diverse creation where no two snowflakes, water falls or sunsets are alike. God’s creation explodes with endless shades of color, shapes, smells and sounds.

Imagine what would happen if we dared to embrace the uniqueness of our physical, mental and emotional being.