I’m a Canadian citizen but also a proud U.S citizen too. And even though I live across the border in beautiful British Columbia, I must admit that I am exhausted.

Maybe you’ve been dancing in the streets.

After 8 years of Facebook-bashing the a leader you didn’t like you expect everyone to play nice and be happy for you.

Or maybe you’re duking out your disappointment in angry protests.  Or you woke up the day after feeling very, very afraid.

This election has been like NONE OTHER in the history of the USA.  It’s going to take a little while for things to settle down.

I personally felt like I was covered in a fine layer of everything that’s gone on for the last 597 days. You know the

coming from either side of the political abyss.

I just wanted to shake it off (yeah, I know you’re going to hate it) Taylor Swift style.

I wasn’t just sure how to do that until this weekend. Then, I glanced up at a flyer on my fridge. It was a notice about a neighbourhood celebration. The flyer went on and on about road closures, parking bans and parade times for the Gurpurab Diwas-Nagar Kirtan celebration.

For the record, I live in a culturally diverse neighbourhood.

Walking the dog is a daily adventure. Exotic smells of foods being cooked. Elderly grandmas and grandpas in traditional dress walking pushing grandchildren in strollers.  Strains of mid-eastern music coming from white tents during wedding festivities.

But, I’ve never really walked the neighbourhood during religious celebrations.

So, I went and checked it out.

Perfect cure for campaign-rhetoric-induced distortion of what being human is all about.

As my mom, daughter and I strolled up the streets I took in the brilliant colours of traditional dress, tasted delectable dishes served from tents set up in various drive ways. 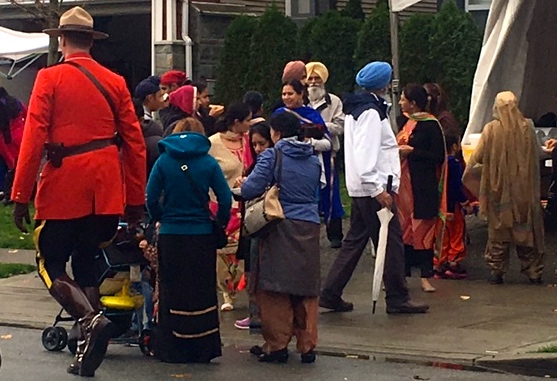 Trust me,  we were definitely a minority. But I felt very much at home.

You see, we all share the same neighbourhood. We walk the same streets. Love our children with the same passion and all of us carry hopes and dreams close to our hearts.

When the posturing of political parties is done, what matters is the kindness expressed to strangers, forgiveness extended to those who have offended, every act of selfless courage, every human bond that transcends race, colour and creed.

America will be truly great when God’s goodness is seen in the lives of ordinary citizens   every single day.

We are neighbours. All of us. From sea to shining sea.